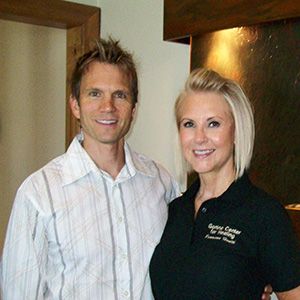 THE GONINOS: Our journey to a deeper understanding of holisitc healing.

Because of the growing popularity of the new movie, The Fault in Our Stars, about a young woman dying of thyroid cancer, I have decided to talk today about thyroid function and it's extreme importance to our health.Before I go any further, I would like my wife, Linda, a thyroid cancer survivor of thirty three years, to share her story with you.

I suppose I should start my thyroid story with the cancer diagnosis and surgery, but I believe the story preceding the diagnosis is just as important, so that's where I will start.

My mother was half Cherokee Indian, my father, one quarter. My mom, her mother and three siblings were diabetic and all but one died young. Her father, a full blood Cherokee, died in his forties from pneumonia as a result of injuries sustained in World War One. Our family, being enrolled in the Cherokee Nation, were provided commodities as part of the US Government's Food Distribution Program for Native Americans. I remember distinctly, my mom opening a box of "cheese" and handing me a slice of this pale yellow, gelatinous and rubbery substance. I remember squeezing it between my little girl fingers, and thinking, it doesn't bend, break or crumble. I disgustedly dropped this so called cheese and refused to eat it. My grandmother would also mix our "free" powdered milk with water, which I also rejected. It was a chalky liquid, that would stay separated unless continuously stirred and shaken. Other "free food" included lots of sweets and sugary juices. My family also received "free" medical care, which basically consisted of drugs for only treating the symptoms and surgeries.

Many years later, recuperating from thyroid removal surgery, my thoughts kept returning to those days. Thinking about my mom dying young at age forty nine from complications of diabetes and heart disease. And now, I had cancer in my early thirties. "Something" told me my cancer diagnosis was somehow related to poor nutritional habits and genetic predisposition. My studies ,work and experience over the past nineteen years has proven this theory to be in large part, true. After my thyroidectomy, I was put on Synthroid, a synthetic thyroid medication, which I stayed on for the next twenty years.

When I reached my early forties, all hell broke loose in my body! My body became a stranger to me. I had horrible sleep problems with adrenaline rushes all night long, which kept me from getting no more than thirty minutes of sleep at a time. My bowels stopped moving, my energy almost non existent, it was all I could do to get our daughter to school and back. It soon took a toll on me mentally and spiritually, because I had always been a high energy (too high in retrospect) positive person. Now, no amount of mind over matter, positive thinking could make my body do what I wanted it to do.

Fast forward to today and, as Dr Wayne Dyer says, I Can See Clearly Now, what had happened in those twenty years on synthetic thyroid medication and the effects it had on every aspect of my body. Thankfully, through a series of "coincidences," John and I were lead on a path of healing education that has enabled us to be a part of many people's healing journey.

I became more and more frustrated about Linda's mysterious symptoms and my inability to help her. I had performed all the usual blood tests, all of which indicated were in the normal range. When I told her the results she said, then just put me in a nursing home.She was a forty four year old mother of a four year old, it was a sad time around our home. A few months later, a patient who I had talked about Linda's situation, brought me a book written by Dr. Majid Ali, called The Canary and Chronic Fatigue. Our lives were changed forever. Linda's symptoms were explained in this wonderful book and we started her on Dr. Ali's detoxification program, changed her to a no sugar, no processed , whole food diet. We started her on a whole body cleanse product that gradually cleansed over six weeks. We followed Dr Ali's vitamin and supplementation protocols, as well and within a couple of weeks her symptoms began subsiding. (This was before we were set up to do the Intravenous therapies, or her response would have been much faster.)Although her health and strength continued to improve, we saw that if she deviated at all from any of the protocols, she would experience a small relapse. These episodes were very puzzling and we continued expanding our studies of Alternative Medicine . We soon found ourselves attending an eye opening lecture on thyroid at an ACAM (American College for the Advancement of Medicine, acam.org )Conference, presented by David Brownstein, MD

Among many other things, we learned that the thyroid lab norms are set too high. That the norms are based on the population, (and we all know that half our population is obese) and not science. That some of the top endocrinologists in the country went before congress to state the case that thyroid norms and treatment should be based on the science and patient symptom presentation. This happened over twenty years ago and has happened again in the last few years and still, nothing has changed, the norms are still set too high and many people are being left untreated as the destruction of their systems continue.

We also learned that the Synthroid Linda and my patients were on, some for many years, only replaced one part of thyroid. Just imagine, as in Linda's case, functioning daily with only half the support her body needed for twenty years, what was going in with the other systems in her body that rely on thyroid hormone, such as the digestive tract and metabolism. You probably guessed it, her digestive and energy systems were sluggish and congested and eventually became toxic from poor elimination and the inability of the cells to receive and transfer nutrients. The body heals with nutrients, no nutrition, no healing, no energy.

I have observed that people with low functioning thyroids tend to rely on stimulants for energy, caffeine, nicotine, sugar, artificial sweeteners, over the counter medications (decongestants) prescription drugs, and even obsessive thinking. All of these are acid forming and adrenaline producing. Adrenaline is designed only for fight or flight, not for getting through your day. It actually oxidizes the cells, similar to rust on a car.

After the ACAM conference, I took Linda off Synthroid, changed her over to natural compounded thyroid that contains both T3 and T4. I also began treating her and my patients to the ideal range of thyroid function, instead of the "normal" range. I wouldn't say Linda sails through life now that her thyroid is properly treated. Too much damage was allowed to occur for too many years. Although I will say that getting her off the adrenaline roller coaster has stopped the accelerated aging process to at least a healthy and natural aging process.

There is much more to tell you about the thyroid and it's effects on fertility, sex hormones, diabetes, depression, anxiety, ADD and cancer. Keep watching and reading.